The World System of Money in Crisis 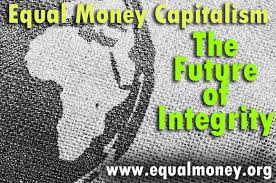 Previously on The World Money System:
The world system – like it or not, is the manifested representation of what is here, in/on/as planet earth. Flowing within and from the world-system is the world system of money – the manifested representation of humanity's relationship to itself and everything else. In other words, within and as the world system of Money is the schematics/blueprints of humanity's relationship to all that is here as planet Earth. Thus, by investigating, understanding, and then redesigning the money system, we are able to give the world system an opportunity to slow down, catch its breath, and begin the process of healing: in essence, a complete planetary makeover without having to close down the planet.

What's wrong with the current Capitalist System and Why is it Crashing?
In a nutshell, the biggest defect of our current money system lies in its valuation of money. There is no standard that remains unchanged from cradle to grave, as in “the only true value is life”, and as such there in no absolute/indisputable, agreed upon equality of anything, not labor, not life, and (thanks to the latest Cyprus heist) not even monies of the same currency. There is however, an abundance of fear, and this is going to get worse, and worse, as the World Financial System comes crashing down.

Why is the current Capitalist system in the process of crashing?
For the perception/illusion of money as value to exist, it must consume and consume. Think of money as a parasite that feeds off the host – planet earth and all its resources. As the parasites feed, they multiply by transforming physicality into money, the illusion/perception of value. As long as the parasites – better known as consumers, do not exceed the host's ability to renew itself, the sustainability of the relationship “may” be maintained. Unfortunately, as the consumer has always only been interested in its own survival, greed and desire for more, the physical deterioration of Earth has for the most part gone unnoticed in favor of ignorance and illusion/money. In other words, the relationship between money and Earth, has become unsustainable to the point that we are now in the end-game of Capitalism as we know it.

Posted by thomaslagrua at 10:39 AM