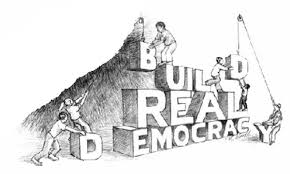 These are the early days, the infancy of (real) Democracy, (real) equality wherein We the people are learning how to cooperate in directing our words and deeds to create solutions that are best for all.


The participation of each human being in forming this world has always been real-time. What has been lagging behind is a comprehensive understanding of how we participate in what we are all creating.


This is now changing, trending towards real-time feed-back (via information/communications technology of the Internet) providing us with an increasingly detailed map of the relationship lines of the cause and effect of our direct and indirect participation within and as the world system.


In essence, what we are now being presented with is one Hell of an opportunity to in seeing the design/schismatics (the interconnectedness of the current world system), understand how it functions and then redesign it to one that is supportive for all, the goal being equality within what is best for all.


The path to understanding and living (real) Democracy, (real) Equality will be as easy or as difficult as we individually and collectively make it. We are the world within and as the relationships we accept and allow; therefore, to change the world is to change ourselves, stand up and participate so as to become the change that we are becoming.


In other words, each one of us is an equal-life component as a determinate of the manifested collective/whole of humanity. Therefore, if we disagree with the way the world-system currently works (which I for one do), all we require to-do to change the way it works is to change ourselves as the system. Specifically, in changing the way we ourselves relate to all parts of the system, we as the system change the system to our new collective specifications.


As a principled standing, I vote we create a system based on the principles of oneness and equality within what is best for all. However, one vote does not a collective decision make, and this is one of the really cool functions of what we are becoming aware of and so co-creating, our collective destiny. Be it an eternal living hell for all or an equal opportunity for all to live dignified lives, we are all equally responsible for determining and so creating the new world.


Democracy as the collective expression of Equality requires participation, and this is exactly what I have been seeing in its infancy on the world stage, people collectively standing and participating in directing world events. Our degree of progress is reflected in the changes taking place throughout the world that are clearly aligned to the directive participation or collective will of the people.


For example, recall the events leading up to the United State's impending attack on Syria, and the buildup of the collective directive of millions of Netizens united in the stand of “do not attack Syria.” In that instance, the people-power or participatory stand of the masses of “Do not attack Syria!” was a collective directive, an example of the democratic “people power,” participatory Democracy in its infancy, channeled to and through Vladimir Putin for him to carry out the people's directive, which he did.


How do I figure all this? It's just guesses, theories of dots and their relationships to outcomes. In the future, perhaps soon on the path to Direct Democracy, we will no longer need to guess, because we'll all have equal access to all information, accountable information.


To change the system of hierarchical power and control of Money to a system of Democracy/Equality, we the people require we stand up and do it, become what we are becoming, self directed, caring for all.

Posted by thomaslagrua at 12:58 AM